Slow Poke was still a two man band as our search continued for a bass player. We even went as far as to place a classified advertisement in Now magazine, a free weekly newspaper in Toronto. Needless to say we encountered some interesting characters, but nobody we felt fit the part. If both Derek and I didn't feel this was the right man for the job, we passed on them. Once in awhile I'd like someone and he wouldn't or vice versa, so it ended up being quite the event. Eventually we met an older guy named Sted. He was rough around the edges like us, and even wore a dreadlock necklace made from his girlfriends hair. Sted looked like he walked the line of being a punk rocker and a hippy. I suppose you could say he had the "grunge" look. So on forward we went with Sted, showing him our songs.

Meanwhile in Brampton, my graduation was rapidly approaching, and there were parties a plenty. There was also a club that opened up in Bramalea called "Backtrax" or "Backtracks" that was hosting live music and a club scene for punks and alternative people. Word on the street was you could easily get served alcohol there underage as well. When the boys and I caught wind that the Epileptic Brain Surgeons were going to be performing there, we knew we had to go check it out.

It ended up just being Jerry and myself that went if I recall correctly, but we were meeting friends there. We decided to take the bus, and ended up on the wrong one, so we got off at Avondale plaza which wasn't to far from the club. During our walk we stopped under an overpass and smoked the pot we had on us, then proceeded on our way. Minutes from the club, peel regions finest police drove by us and halted to a stop. They quickly jumped out of the car and gave us the business. Where we were coming from, where we were going, we match the description of two guys they are looking for etc. etc.

The next thing I know we are being searched at the side of the road. One of the officers found a smoking pipe on my person, and within minutes we were practically standing out in public at the side of the road with our pants around our ankles. If that wasn't embarrassing enough, we were then instructed to get in the back of the car, where they had us pull our underwear down to make sure we weren't carrying anything. I had never felt more humiliated and violated in my entire life. We were clean and the cops sent us on our way eventually after taking all of our information down.

We finally got to the club and made it in without further incident. We attempted to order beer and to our amazement we got served without question! Even though it was an all ages club, it was apparent being of age didn't matter when it came to buying a drink. We sat down in a sigh of relief at the front of the club close to the band. I just about shit ten bricks when I realized the opening band was those guys who were at ever E.B.S. show, my rivals from Chinguacousy school. The guys who I despised even though I didn't have a reason too....Demon Barf! I decided given the events of the night that I would actually pay them an honest listen, and much to my disbelief they actually won me over. I had a new found respect for these guys.

Just as things were getting good I noticed a commotion at the other end of the club. I looked over and my jaw dropped when I saw the same two police officers who had stopped us a mere 30 minutes ago. They were stalking their way through the club specifically looking for people who were drinking and asking to see their I.D. In a panic I let my friends know what was going on, and we all chugged our drinks down in synchronization, then dumped our empty bottles on the floor under the table. We managed to escape persecution, and the boys in blue were on their merry way.

Eventually E.B.S. took the stage, and to be quite honest I barely remember it due to the circumstances of the evening. Regardless, the Brampton band known as Demon Barf now had a few more fans... 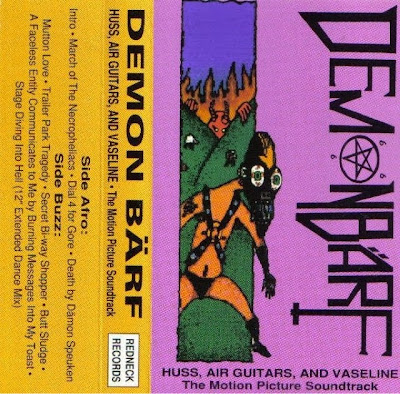