Although I was loving my new job at HMV it was really my only connection to music at the time as I wasn't playing in any bands, however that would all change with one phone call.

I was relaxing on the couch in our appartment on the 19th floor of Silver Maple Towers one day when the telephone rang, and obviously I answered it. I was surprised to hear Gerg's voice on the other end of the line, as we hadn't spoke since the demise of Wiggaz. I was still somewhat bitter over the whole situation and was harboring feelings of resentment towards Greg.

He was very humble as he apologized for the way things had transpired but I was not sure if I was ready to forgive him. We caught up with each other over some small talk and eventually Gerg got to the purpose of his phone call.

Rob, the former bass player of Wiggaz had moved to Vancouver awhile back and he was coming down east to visit. Greg expressed interest in playing a Wiggaz reunion show at our old stomping grounds of The Ivy Bridge where we first cut our teeth. I mulled it over in my head as he proposed the idea and in a matter of minutes I made my decision.

I agreed to play the gig but my heart was telling me I was making this decision for Rob and not for Greg. I don't think I was ready to forgive him at the time, but I liked the idea of our band getting back together even if it was for one night only.

The buzz of this show circulated quickly and the year was flying by rapidly which I had no problem with. Before I knew it the magical day of August 9th 1997 had arrived and it was time for the gig.

I had thrown out my old suit I wore religiously in Wiggaz so I had to figure out something to wear, but thankfully I still had my trusted Satan mask. My girlfriend Jenny took me to her parents house to rummage through their Halloween costumes and I happily stumbled upon a priest robe. I thought to myself "this is perfect" and snatched it up along with a cross on a rope that I somehow managed to invert.

I also planned on wearing a bloodied white shirt underneath which signified I was still wearing the shirt I had on when I was "assassinated" at the final Wiggaz show prior to this. Furthermore I made the concious decision that I would finally unmask myself for the first time ever.

I arrived at the Ivy Bridge early that day and there was already a small crew of friends hanging out. I was surprised to learn that we were performing on the main floor, as we had always played in the basement. I was even more surprised to see my old pal and EBS frontman Steve Waller was down from BC and in attendance. This really made my day and it was awesome catching up with him.

After a few hours of schmoozing and drinking the place was packed and it was time to rock. I stealthily slipped away into the bathroom or kitchen (I can't quite remember) and transformed myself back into "Satin" once again. 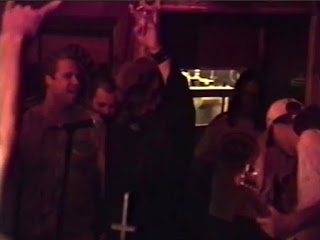 I heard the boys instruments as they warmed up and that was my cue. As I entered the room I got a huge pop from the crowd and it was time to fuck shit up. I was overwhelmed by the amount of people packed in like sardines and they went absolutely bonkers for us. Quite possibly one of the greatest receptions we had ever received during our time together as a band.

The rest of the night is really all a blur to me but I still remember that it was an incredibly magical evening. It was like we had never missed a beat.

Later on down the road a friend of ours Bob Kareer, who worked at musicplex with Greg, had given us a copy of the show he shot with his camcorder. It was amazing to relive the memories and see how crazy the audience went. Thankfully I was able to get a copy of it recently and I added it to my YouTube channel for all to enjoy via the links provided.

It seemed like the perfect reunion and farewell of the Wiggaz all rolled into one, but was it really our last performance?