Greetings everyone! It's time once again for a general update. As another year approaches its end I couldn't help but feel somewhat guilty that I hadn't released any new material this year. Looking back now in retrospect I did release 4 albums in 2015 so I'm not feeling as bad about it now, plus I've managed to release an album before the year ended.

I spent the better part of 2016 working on two albums, and recently I started working on two more projects. I am happy to announce that on November 28th 2016 I finally released "If You want C.H.U.D... YOU GOT IT" a vision I started in early 2014 after a friend and customer of mine mentioned he really missed me working with metal and hardcore bands. I decided to incorporate my two musical loves of rap and metal and infuse them into somethings special for my friends and fans alike.

I ended up working with a variety of people and that definitely shines through in the songs, as each one is different from the next. There's some rap metal, thrash, hardcore, electronica, industrial, and even 3 cover songs, all embracing the heavy music that inspired me growing up as a teenager. This was a super fun project and it was so worth the time it took to get out.

I'd like to give a major thanks to Greg Dawson of BWC Studios for helping out with the mastering once again, and big props to Steve "Knuckles" Donohoe for passing more production wisdom onto me. You can stream or download the album for free via the link provided below. This is a free LP so simply click the "buy now" tab and enter $0.00 as your price.

In some not so happy news, I lost a friend yesterday. I'd like to give my condolences to the family of Dave Wroblewski. In 2007 I became a father and I wanted security for my family so I took on a second job in the spring of 2008. I met Dave through work and we hit it off famously as we were close in age and shared a lot of common interests. I can count on both hands how many friends I made after 5 years at that job and Dave is right up there at the top of the list.

I looked forward to conversing with him every day, as we always had great conversations and lots of laughs. He was one of the few co-workers I actually wanted to hang out with away from work, and we had some fun times. He was such a genuine person, and he was an amazing father, raising his son Teddy all on his own. Our kids became friends despite the age gap, and Dave would offer to babysit for me anytime I was in a jam. On top of that he was my goto computer repair guy and he helped me out a lot in that sense.

Dave was a great generous person who would put his own neck on the line just to do a kind deed for his friends and family. After I left the job he was one of the only people I kept close contact with and we saw each other on a weekly basis. He ended up leaving his job and moved onto bigger and better things, earning employee of the year at his new occupation which in turn won him a trip to Vancouver.

Just when it seemed like everything was getting better for Dave he was diagnosed with stage 4 cancer precisely one year ago. Things started going down hill rapidly, and unfortunately he was unable to take his trip last April. He was loosing weight at an alarming rate and chemotherapy wasn't helping, yet amongst all the madness he was still always positive, strong, and optimistic. This past year he spent most of his free time at his family's cottage, connecting with nature and his kin, which brought him great happiness.

I was devastated yesterday when I heard the news even though I knew it was only a matter of time, yet still nothing can prepare you for the loss of a friend. He's left behind a 14 year old son and I want to do anything I can for that child as nobody deserves to lose their father at such a tender age.

Once again I'm left baffled why the good ones are taken from us when there is so much human trash infesting this planet. You will be missed dearly by many people Dave, and even though we've only been friends for 8 years I feel like I've known you all my life. In reality I wish I had known you longer as you were an incredible soul. Dave was also an avid fan of this blog, and I'm honoured he is now apart of it despite the unfortunate circumstances. I'd like to think you are sitting on a cloud somewhere reading this.

Rest in paradise my friend... 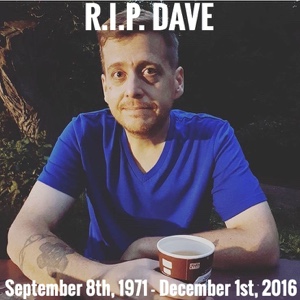