Greetings everyone and happy Devils night! My favorite time of the year has approached us once again, and I'd like to wish everyone a safe and happy Halloween. I wanted to apologize once again for my lack of posts over the past few months. I have had a lot of things on the go which in turn has affected my time to write. Moving forward from here I shall try my best to post at least once a week.

Asides from spending time with my lady, friends and my son, the majority of my free time has been spent working on music. I've actually had quite a few projects on the go as of late. First and foremost I recently released the "Lockdowns" LP, which is essentially a self proclaimed collection of greatest hits, or greatest misses, depending on how you look at it. I chose 15 tracks from the last 15 years that have garnished the most positive feedback and downloads. You can stream or download the album for free via the link below.

I've also been working on my latest full length "Theokoles" which will hopefully drop in January of the new year. I've completed a handful of tracks thus far and it is coming together nicely. The new album will feature a few guest spots as well as a couple of guest producers. Stay tuned for the announcement of who will be joining me in my quest. I am keeping it all under wraps until it's completion, but you can access the song "Two Crows" in the meantime, a dedication to my fallen brothers Mike Chapman, Jay Poole, and Rich Polyzotis.

Last but not least, I spent the majority of August and September working on my second Halloween EP entitled "Horrorcore Bouillabaisse II" Some of you may recall I did the first bouillabaisse back in 2009. I figured it's been six years so why not do another one right? This time around it's a bit different, as majority of the songs are actually cover versions of rap songs that have appeared in horror movies. It was a super fun project and once again my man Greg Dawson from BWC studios was kind enough to supply the mastering. The EP drops tonight at midnight in celebration for All Hallows' Eve. Be sure to get your copy and have it bumping while you hand out candy to the kids tomorrow! 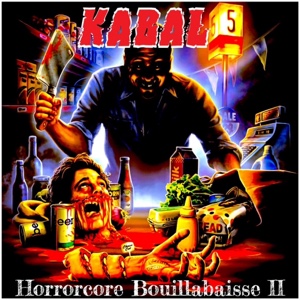 That's all for now folks, I'm signing off here but I shall be back tomorrow with another post in the ongoing story of Heavy Ghetto...