Revenge of the nerd

There was yet another life changing event that occurred in 1984 that I feel deserves honorable mention even though it isn't music related, but it would eventually become the most instrumental tool in my musical ventures. The introduction of the home computer.

My friend Craig had the "Vic 20 " and my cousin Gord and my buddy Duane had the "Commodore 64" and I was fortunate enough to have gotten to use and know them both before they were introduced into our school that year. I clearly remember the first time they took our class to the library to use the new computers. The teacher gave us a quick crash course in how to use them, then we were given assignments to do before the class was over. I whipped through the work in no time and while all the other kids were struggling to finish up I was drawing a picture of the NASA space shuttle. 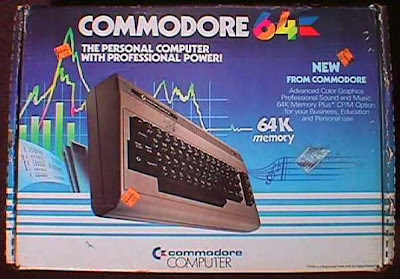 As the class was winding down to its end all of the kids were now done the tasks given by the teacher and were standing around me in awe admiring the work of art I had created. Once I knew I had every students undivided attention I simply held down the enter key causing my shuttle to launch up and off of the monitor screen. There was a huge eruption of praise from my peers and I felt really great about myself. Here I was, the bad seed, the class clown, the "devil worshipper", showing up all of my classmates.

Before the computer was introduced I had grown up playing Atari and Intelivision at my friends houses until my dad bought us the new cutting edge system "coleco vision" and I immediately wrangled up 30 bucks in silver dollars I had saved and went to consumers distributing in the mall to buy donkey kong jr.

I went onto continue using computers throughout highschool and always had a knack for them. From 91-97 I never touched one again asides from playing the odd game of "Doom" at Paulie's house on PC circa 93. I got on board again once the internet age started booming and it was amazing to see how far things had come since my BBS days in highschool.

BBS stood for bulletin board system and it was a form of peer2peer sharing via telephone modems/home computers back in the 80s, a pre cursor to the world wide web if you will.I had boughten my cousin Gord's "64" off of him and was constantly in my room on it.

The home computer is what I now use to create and arrange and record the music I make today. Although I never looked the part I have been a computer nerd since the inception of the computer itself...
Posted by Kabal at 03:02