RU Down With The Goats?

Christmas definitely did come early in 1992. I was gifted with the discoveries of many new hot bands, I got to see my beloved Beastie Boys in concert again, NOW Magazine had featured us, Grasshopper was getting a lot of great opportunities, and to top it all off I was going to get to witness a live performance by The Goats, who had quickly become my new favourite rap group at the time. They were opening up for Consolidated, so that was an extra added bonus treat as well. I had lots of B.T.s and high fives waiting for Santa! 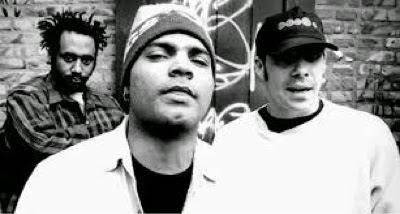 I was super stoked for this concert, mainly because The Goats were still so new to the scene and virtually unknown, this made a guarantee of a small, intimate show, the kind I liked the best. I had been listening to their LP "Tricks of the Shade" non stop since Derek returned from CMJ with it back in October, and in that short period of time I had already memorized practically all of the lyrics. I always liked thoroughly knowing the music of a band I was going to see in concert, as it always made for a more ultimate experience.

The night of the gig arrived and we got to the Opera House fashionably early for a change. I wasn't surprised at all by the lack of people there. Consolidated were a fairly established band, but nobody knew who The Goats were. I assumed Consolidated fans would show up later in the evening, and I wasn't complaining about that at all, as I managed to secure a spot dead centre at the front of the stage. The crowd was thin and loose, and the dance floor was practically empty.

The Goats hit the stage in a rage with high energy, wailing mics, and pounding beats. They put on an amazing performance and I'm pretty sure I was the only kid in the crowd rapping along to every song word for word. The three MCs, Oatie, MADD, and Swayzack, made eye contact with me numerous times, and they were even shaking their heads in disbelief over the fact I knew all of their material. They even went as far as to shove their microphones into my face from time to time. I imagine they were slightly impressed considering their album hadn't even been out for two months. The rest of the crowd was grooving along, but it was apparent they weren't familiar with The Goats, they were just going with the flow.

By the time their set was over, I turned around to head to the bar. I was shocked to see the Opera House was now fully packed with people from one end of the club to the other. Clearly I was right in assuming Consolidated fans would skip out on the opening act. I squeezed my way through the sea of people and grabbed a cold one. I looked to my left and realized MADD from The Goats was beside me at the bar getting drinks. I immediately gave him props for an amazing show and he went on to give me props for knowing all of their lyrics. He was totally blown away and mentioned how crazy it was that I was so familiar with them. We had a great little pow wow, then MA double D returned to the backstage area.

After what felt like an eternity, Consolidated finally hit the stage. They had a giant video screen set up behind them that played imagery to coincide with every song. A lot of the imagery was very graphic, and it reminded me of the Mal Havoc days. Consolidated put on a really solid show as well, and it was a very interesting and diverse crowd to say the least considering he band were advocated of women's rights, animal rights, gay rights, and racial rights. There was a song on their album that contained a bunch of audience members debating issues, so I was curious to see if anything like that would unfold.

Sure enough, after a solid hour or so of musical performance, Consolidated cut the music and declared it was debate time. People from the audience were welcome to hit the stage and discuss issues regarding, politics, government, sexual preference, racism, and animal cruelty, just to name a few. It was fairly interesting to say the least and definitely was something special that you don't see at concerts on a regular basis. It did get a bit stale and boring after awhile, so we decided to dip out and call it a night.

All in all it was an amazing night and another incredible concert experience under my belt. Plus I got to meet and talk with one of my new rap heroes. My only disappointment was the fact that The Goats had absolutely NO merchandise for sale. I would of loved to have gotten a T-Shirt at least to add to my collection.

It had been one hell of a year, perhaps better than the previous year, which had been absolutely mind blowing. I could only wonder in amazement what 1993 was going to be like...